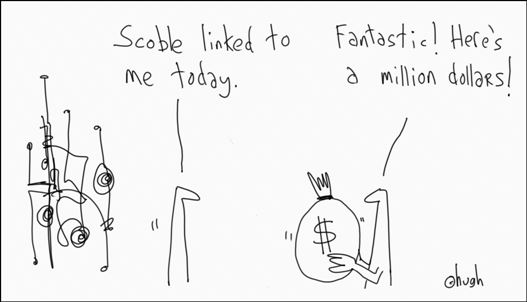 This Scoble thing’s a laugh isn’t it?  I’m entirely with Facebook (on this, at least).

But of course I won’t do, because I know all of my Facebook friends.  I’ve met them.  Scoble doesn’t know all of his 5,000 so-called friends…he’s just been happy to accept all the friend requests.  It’s not his fault that, in the friend finding frenzy that smothers us all when we sign up to Facebook, people send friend requests to anyone and everyone they’ve ever heard of, let alone talked to.  And can you really blame Scoble – ego boosted by this superficial popularity – if he gives in to human weakness and decides to grab all that lovely data?  After all, he probably didn’t have many friends at school.

But he got nicked.  It’s a fair cop guv…just go quietly, for Christ’s sake.  Jack Schofield’s got it right this morning: “So what is Scoble playing at?  If he wants to harvest data from his Facebook friends, he should not only tell us what and why, he should ask us first.”

Surely we can all learn something from this about Facebook?  When I was little, my parents told me not to speak to strangers.  Parents these days should be telling kids not to make friends with strangers on social networking sites.  It goes for adults too.  This morning I went through all of my Facebook friends and “defriended” all those that I haven’t actually met in person or had some meaningful communication with.  That was just two out of 219.

Coincidentally, Hugh MacLeod has a post on his blog this morning in which he interviews Seth Godin about his new book.  MacLeod asks him whether handling the public side of being Seth Godin is becoming harder as he becomes better known.  The first bit of Godin’s answer:

Facebook is pretty much the only hassle right now. I joined to check it out, but I don’t use it, and I end up disappointing a lot of people I don’t ‘friend’. I should just turn it off, I guess. (Once you friend someone, I figure, you really owe them quite a bit of interaction).

Now there speaks a man who understands marketing.  No indiscriminate friend making for our Seth.