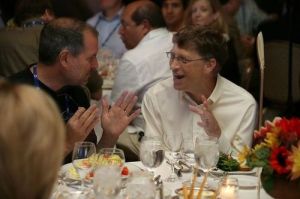 It’s just I can see myself in your knickers.

One of my favourite chat-up lines.  In theory at least.  I’ve never had the balls to use it.  And of course, I never would. Ahem.

Chat-up lines are designed as conversation starters though, aren’t they?  Make ’em laugh…get them in a conversation…see where it leads.  If they don’t kick off a conversation, they’ve failed.  It’s a bit like social media.  In fact (Swiss Toni voice), “social media is very much like chatting up a beautiful woman…”

See those two fellas above having a conversation?  I wonder what they’re saying?

“Whoa!  But I’d have to like hold it in my hand like this, open up my mouth real wide…”

Talking about an early iPhone prototype, no doubt.

I don’t suppose those two have to fish around for too long to spark a conversation.  It’s more difficult when you’re a business and you want to strike one up with an individual, or audience, that you don’t know terribly well (and let’s face it, most businesses don’t).

Think about the great conversations that you’ve had.  How did they start?  Probably with a brilliant question.  Or a forthright opinion.  Or a piece of honest feedback.  Or a good joke.  Or maybe even a chat-up line.  Great conversation starters are thought-provoking, controversial, funny, divisive, sincere, candid, direct, contentious.  Now how much PR pushed out these days is any of those things?  Not much.  It’s all very bland.

The new world demands that we provoke a reaction – an emotional reaction – because that’s the only way we’ll be able to enter into a conversation.  And let’s not be afraid to provoke both negative and positive reactions (though on balance, obviously, we’d prefer that the positive ones came out on top).  Negative reactions can be very useful…because you very quickly learn what the audience doesn’t like and can change your behaviour accordingly.