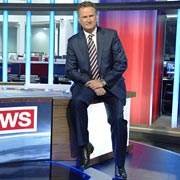 I came across an interesting old/new media mash-up on TV last night.  Flicking around to find something to watch before the new series of Oz and James’s Big Wine Adventure (or whatever it’s called) I turned to Sky News and found myself watching Sky.com News, presented by Martin Stanford.

Basically, the programme’s about all the news that’s floating around the web, so some mainstream stuff that’s on telly anyway, and some web-only.  The screen treatment grabs the eye – there’s a set of ‘web-like’ menu tabs along the top of the page and the screen spends a lot of time split into two or three separate images.  So, for instance, when one part of the screen is showing a fairly standard piece of news coverage, another part might be showing commentary relating to the story from a blog or website (the names of which are always prominently featured).

Some of the coverage felt quite rough and ready.  The show cuts together standard news coverage with user-generated video and live outside broadcasts.  Last night they grabbed Kylie on the red carpet in Leicester Square.  It was an interesting piece – we went to the live reporter quite early, and had to wait with him while Kylie made her way past a number of different reporters…we therefore listened in to other interviews, saw how the Sky man had to take his chance to grab her…it gave a real sense of the news gathering process that I quite enjoyed.

Stanford was joined throughout in the studio by a pundit who commented on all the stories – last night he was from one of the gaming websites (can’t remember which) – and closed the show by showing the top 5 video clips currently doing the rounds online.  The top one last night made me laugh like a drain.  You can watch it here.

It certainly felt like a different sort of news coverage, and I wonder whether it’s a glimpse into the future when our TV screens will more closely represent the web – and vice versa – and news coverage will be a mix of the story as reported, live commentary on it from the web and user-generated additions?

It looks like it’s on most weekday evenings at 7.30pm on Sky News – worth checking out.  I certainly enjoyed it more than I did the Oz and James licence fee-funded piss-up that I watched after it…